The Island by A. A. Milne 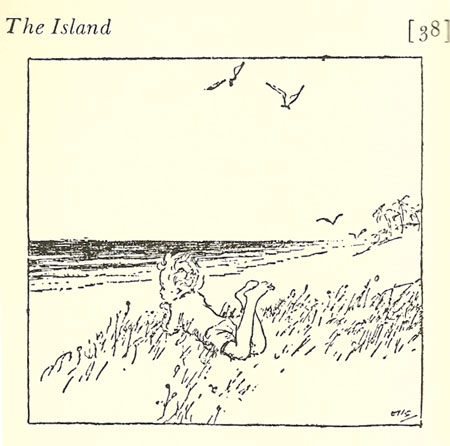 I am a huge fan of A. A. Milne’s children’s stories, so it comes as no surprise that I’ve been reading classic Winnie the Pooh to Mackenzie as part of our soothing process. I’m thankful that Steve Jobs saw fit to include the first volume in the iBooks store; we finished it quickly, so I purchased The House at Pooh Corner, and we’re three quarters of the way through it.

I have several vintage copies of Winnie-the-Pooh books stored away for Mackenzie, including one or two first editions. I found them and set them aside for her ages ago when she was just a thought in our minds. This past July, however, when my family came up to Nashville to visit, I found a 1961 copy of When We Were Very Young by A. A. Milne in a used bookstore in Hillsboro village. Most of the rhymes are simple, but as usual, A. A. Milne has a way of speaking to the heart of adults as well. So far, “The Island” is my favorite:

If I had a ship,
I’d sail my ship,
I’d sail my ship
Through Eastern seas;
Down to a beach where the slow waves thunder –
The green curls over and the white falls under –
Boom! Boom! Boom!
On the sun-bright sand.
Then I’d leave my ship and I’d land,
And climb the steep white sand,
And climb to the trees,
The six dark trees,
The coco-nut trees on the cliff’s green crown –
Hands and knees
To the coco-nut trees,
Face to the cliff as the stones patter down,
Up, up, up, staggering, stumbling,
Round the corner where the rock is crumbling
Round this shoulder,
Over this boulder,
Up to the top where the six trees stand….

And there would I rest, and lie,
My chin in my hands, and gaze
At the dazzle of sand below,
And the green waves curling slow,
And the grey-blue distant haze
Where the sea goes up to the sky….

And I’d say to myself as I looked so lazily down at the sea:
“There’s nobody else in the world, and the world was made for me.”