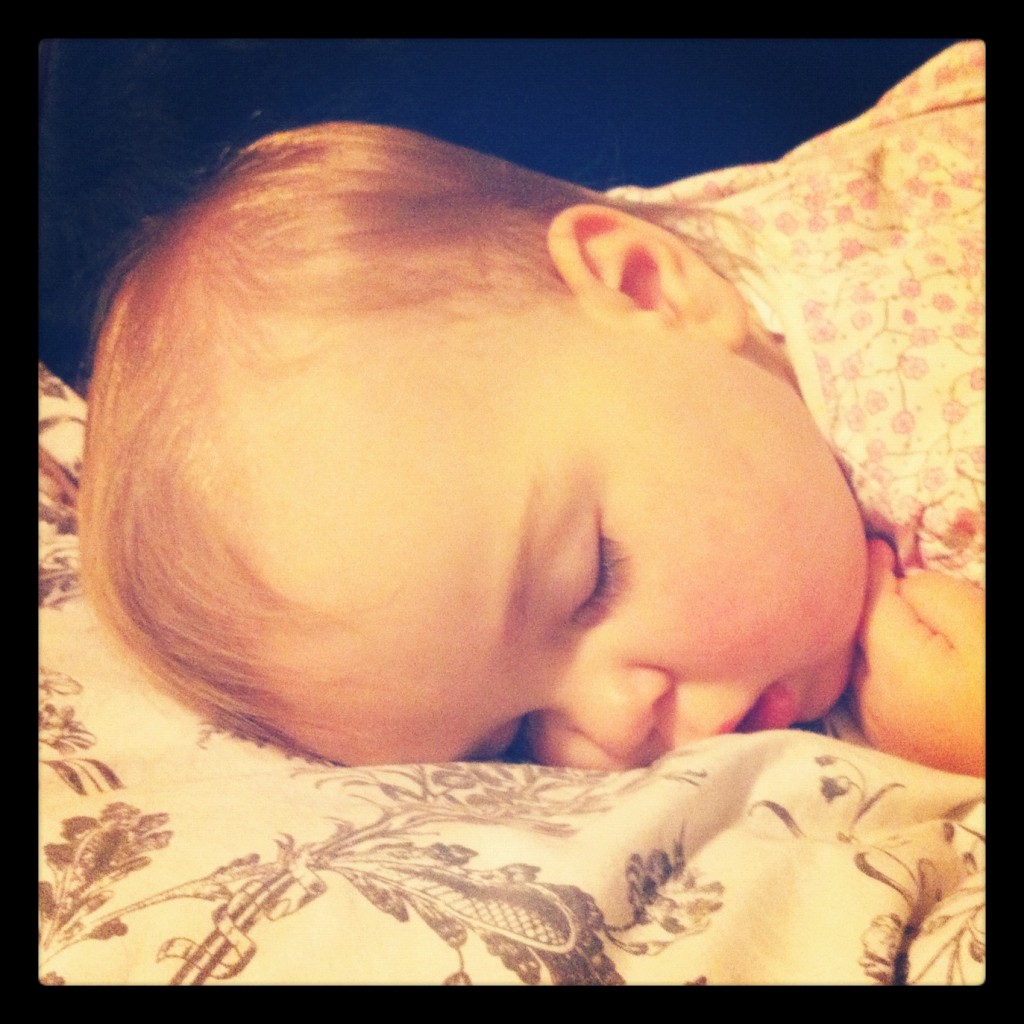 This was the morning after the first and only night Mackenzie has ever slept through the night completely — January 16, 2012. Doesn’t she look so peaceful? And rested? We need more of this.

Way back when Mackenzie was just a few weeks old, a sweet friend of mine and very wise mommy suggested I read Marc Weissbluth’s book, Healthy Sleep Habits, Happy Child. I did, and I have continued to try to follow its advice since then.

That said, we have tried Weissbluth’s sleep training strictly, Weissbluth mixed with our own methods, Sears, and a variation of the Baby Whisperer technique. We’ve had a consistent bed/bath/story routine since she was about eight months old. She has always been an early riser, usually waking up around 6:30. Bedtime is no later than eight. She takes one two and a half hour nap each day from about 11:30 – 2:00. Nothing, absolutely nothing is working.

There was one glorious night back in January that Mackenzie actually slept through the night. I have a picture of her fast asleep. So glorious. I don’t think she had weaned yet, though — that changed so many things.

There is a good chance she is teething her two-year molars, and if that’s the case, son of a gun. What a bear.

I’m worried it’s more than that. That it could be medical. Another ear infection, maybe? She just finished her antibiotics for the last one on Friday. Or allergies? She had some strange welts on her hiney after eating mixed nuts at the zoo the weekend before last, so we have cut those out of her diet.

I’m worried it could be emotional. She’s in daycare all day, and as much as I hate that, it’s a quality program, and her teachers love her to pieces. I call at least once a day to check in. I really don’t think anything is going on at school, other than that she just misses me.

She is very, very attached to me — which is wonderful, except that it is very hard to put her down when we’re at home together, especially during the week. She also won’t let her Daddy soothe her, and that is very hard for him. Heck, it’s hard for me, too.

So any advice? I am open to suggestions! Or even just a bit of commiseration. Any other exhausted parents of a toddler out there?

{You Capture} Emotion in Black and White