I can’t believe Mackenzie is five months old today! It seems impossible and unreal. But here she is.

I’ve been meaning to share her birth story for months now, but I haven’t been able to craft the story just the way I want to tell it. It was a magical day, but it was also full of pain and the unknown. Her arrival was a miracle, and I was so thankful that she was safe. Holding her, really holding her after I was in the recovery room, was indescribable. I was overwhelmed and amazed. I still am.

So here’s the story. 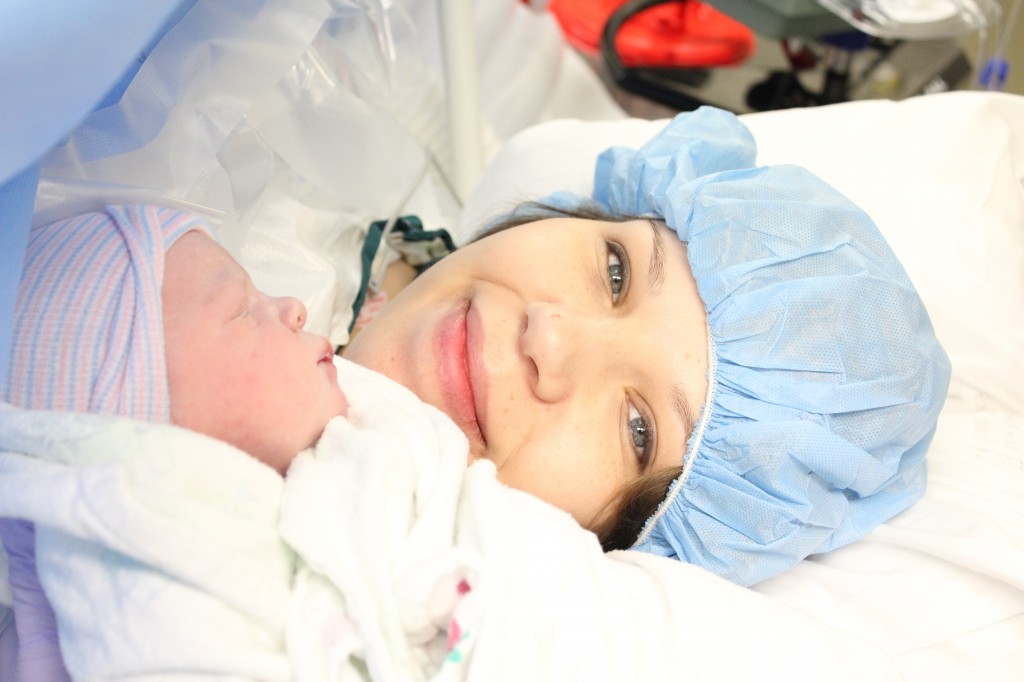 Lea arrived at 10:30p on Sept 30. We drank hot cocoa and showed her the nursery and guest room. I cleaned the house to prep for guests, and Chris and I did medical POA in the morning. Then, Chris packed the car and played with the dogs. Lea followed us in her car to the hospital. We recorded videos for Mackenzie in the car, and Lea recorded hers at the hospital.

When we arrived at the hospital, we filled out paperwork and waited for an hour or two. The hospital had several emergency deliveries and was running behind. Chris and I went back to prep around 11:30. Lea called people and ate lunch while the nurse prepped me and we signed more paperwork. They were also short on post partum rooms.

Chris held my hand during the IV. I was so proud of him for sticking it out. I tried not to squeeze his hand when it hurt, though, because I didn’t want him to have a hard time. At some point we finally convinced Chris he should go and eat while he could.

While I was in the prep room waiting for an OR to open up, Mackenzie’s heart rate dropped a few times. At first we thought it was the monitor, and just the nurse came in to readjust it. Then my doctor came in, and they turned me from side to side. They were concerned and said they would get me in as soon as they could.

At 1:30, they took me back to start anesthesia. The doctor’s assistant used an iPhone koi pond screen saver app to distract me, and we all talked apps and tech. I told them about Ria and Chris’s cat app. They gave me a spinal instead of an epidural and explained that I would be completely numb from the rib cage down instead of just my waist and hips. The spinal wasn’t bad — I just breathed and counted through it. A nurse practitioner/final year med student administered it. The anesthesiologist oversaw her work. I was most worried and scared about the catheter, but it truly wasn’t bad, either. I couldn’t feel it at all.

They finished prep, set up the blue drape, and brought Chris in. I couldn’t move and my legs felt numb. It was strange and scary, but I just focused on my breathing. In and out. And I sang, “Oh, how He loves us,” in my head. Over and over, all day, from start to finish. I felt an incredible strength in singing that song, in knowing that God was in complete control over that day. Over Mackenzie’s birth, over her conception and growth, and over her arrival into the world. I felt like He was holding us.

Cesarean sections are so strange because you are aware of everything that is going on. I could hear the doctors talking while they worked on me, and occasionally the anesthesiologist would fill me in on what was going on. I was thankful for that. I remember that the doctors were fascinated by watching Mackenzie move her feet against the amniotic sack. Then, they broke my water and started pulling Mackenzie out. At first Chris held my hand, but then he decided to watch. He stood up to take a picture, but they said he couldn’t yet. I was so worried about him watching, but he wasn’t scared or grossed out – just in awe.

The doctors discovered Mackenzie’s cord was wrapped around her neck three times. It explained why she had been breach for so long, why she hadn’t been able to flip, and why her heart rate dropped earlier. It would have been very dangerous if she had flipped or if I had gone into labor on my own.

The anesthesiologist explained things to me when everyone else was quiet.

After the doctors pulled Mackenzie out, they held her up for me, and Chris took pictures. She was purplish and covered in white vernix. That first moment was strange — I knew what babies looked like when they were born, and I could hardly believe that was her, that she was mine, that she was really here. It sounds strange to say it, but I was so proud of her.

Mackenzie needed help breathing at first, so they gave her two breaths. Then, she cried, and Chris went to her and said, “Mackenzie” in the same voice that he had been talking to her in for months and months. She stopped crying and turned toward him. What a precious moment!! Chris and I made eye contact, and I thought my heart would burst. He was so hoping she would know his voice, and she did.

Then the nurses brought her to me for a moment and let Chris get a picture of us. I couldn’t believe she was really here and safe. I knew God had been with us.

The rest of the story is that I only saw her for a few moments before they took her to the NICU for her breathing, that recovery was HARD, that nursing was also really hard, that I cried a lot, and my sister Lea was incredible. But we got through it, and now I have this amazing, beautiful baby girl in my life. I am so thankful for her. She changed me the moment she was born, and she continues to change me every day. I can’t imagine life without her.