Review: A Million Miles in a Thousand Years by Donald Miller 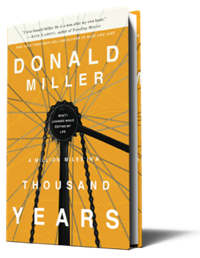 I have the honor of participating in Thomas Nelson’s book review bloggers program. The first title I selected for review is Donald Miller’s new book, A Million Miles in a Thousand Years.

Donald Miller has been one of my favorite authors for the past few years. His breakout title Blue Like Jazz gave voice to the feelings and thoughts held by many disillusioned young adult believers, in a way that we may not have had the courage to do. Don simply went first, and carved out a path for others to follow. To Own a Dragon is my other favorite of his works, because I have not yet heard anyone else give a voice to what it is to be fatherless in such a sincere, raw manner. Even though I’m a girl, and girls growing up without dads is far different than boys growing up without dads, I felt a sense of release, like it wasn’t just me, and that fatherlessness truly is one of the great societal challenges of our generation.

A few of Don’s other titles include Through Painted Desserts and In Search of God Knows What, neither of which I have read yet, but friends of mine have given both titles rave reviews.

A Million Miles is another memoir-style book, but this time Don takes us through another phase of his journey as a believer. Rather than questioning the faith, in this book, Don shares the self-revelation he experienced when two filmmakers came to him to craft the “story” of Blue Like Jazz for the movie version. He realized that every life is a story, and that the way he was living his everyday life did not necessarily make a great story. So, he decided to change it.

There are important elements that make up every great story, from the events that make you love the hero, to inciting events, to the pain that the hero must go through in order to bring about the best possible ending.

Don set out to understand what goes into crafting an epic story, and through his growing awareness of story, was able to change the way he lived his life, from being open to turns in the story to embracing the pain that goes into making a good ending. Even more powerful, Don was able to share what he was learning with friends, and to see how the same concepts could turn his friends lives and relationships around as well.

We are all living a story, and we’re the heroes in our own stories. Million Miles has me thinking about the kind of story I am living, and how active I am in the plot and direction. Am I living a comedy, a tragedy (I hope not!), an adventure flick, or an epic tale? Who are the characters in my story? I’m the leading lady, but am I acting like it? What victory have I set out to win? What challenges must I overcome? What pain must I embrace?

I read Don’s book in a period of six hours on a road trip with my husband and brother-in-law from Nashville to South Bend. I couldn’t put it down, even after the sun set and I was forced too read by the light of my open laptop. My other brother-in-law is also a Donald Miller fan, so I promptly gave him my copy when I saw him the next morning.

This is a book that everyone should read, whether you’re young or old, conservative or liberal. Like Blue Like Jazz, it will open the back door of your heart and create a new self-awareness. It’s also an inciting event – when you’re finished, you’ll have some important decisions to make.

What will your story be?